John Lennon. Brilliant singer-songwriter for the Beatles and solo artist for a decade and New York City citizen for just as long, died from the gun of a zealous maniacal fan who shot him four times in front of the building where he lived with his wife Yoko as they were heading home.

This is where I and millions of others were at the moment when Lennon’s passing was announced. During Monday Night Football by the inimitable Howard Cosell:

John Lennon’s music, activism, acerbic wit and aggressive outspokenness were truly tailor made for New York City. These songs, while not as well known as his other world reknown counterculture anthems like Instant Karma, Imagine, and Happy Xmas, are just as essential, prophetic and immortal as those classics.

Lennon’s debut and greatest album Plastic Ono Band was full of raw emotion and invective against it’s targets on a personal and systemic level. Especially on the vicious and focused “I found out”, which references his old songwriting partner while addressing symbolic authority figures

The piano driven “Remember” was basically a precursor to his global peace anthem imagine, being that the lyrics focused on recognizing the past to make a better future. Plus the song abruptly concludes with an acknowledgement to Guy Fawkes as a suggestion that the future might not come easy without drastic measures or with an ultimate solution (that’s a nuclear explosion at the end)

“God” is also another song questioning an authority figure. The most ultimate and omniscient and omnipresent one that John reduces to a mere idea that we can’t see or hear but that is constantly being deflected to for fortunes and misfortunes, being that he/she/it is the creator of all things to the general/global public.

Lennon’s best songs are the ones where he calls out hypocrites and liars and nothing is more obvious than the best song on Imagine, the metallic “Gimme Some Truth”.

On Lennon’s smash album Walls And Bridges, he composed his most New York City themed song at the time with “Steel And Glass”. Even though it was directed at a few of his acquaintances, the symbolism John used of New York City’s towers to describe his subjects insecurities (and his own) is a near prophecy for the tower pestilence over-development that has taken over this town.

John Lennon’s swansong “Nobody Told Me” is a stunning masterpiece on the paradoxes of life and the blowback of existential chaos wrought from them which continues to affect societies around the world. The man who wrote Imagine 11 years earlier responds to his verses listing these conditions as “strange days indeed” sounds like a man grown cynical adjusted to them even though the rollicking music conveys optimism.

His last words in the song “most peculiar mama” might have been a shoutout to his wife who was in the studio or his actual mother Julia, who he joined in the afterlife a year before this recording was released. It was his last top 10 hit.

Who knows what would have happened if John Lennon lived. If he decided to go straight to the Dakota building instead of greeting his adoring fans when he came home that night and seeing that lowlife stalker Mark David Chapman again. Maybe Double Fantasy’s followup Milk and Honey would have resulted as a modern day classic comparable to his first 2 solo albums and his Beatles legacy. Maybe John Lennon would have got more civic minded and railed against the elected politicians and their powerful financial backers. Maybe John would have got repulsed by Mike Bloomberg’s illegal third term and run against and easily beat him. How he would have responded to the city’s horrendous response to the pandemic and the Black Lives Matter protests this summer…

John Winston Lennon was cut down so young and still in his prime that it’s easy to imagine what he could have accomplished (pun intended). But his influence and spirit on music and activism still lives on today in the city he called home and around the world.

“And so dear friends, you just have to carry on” 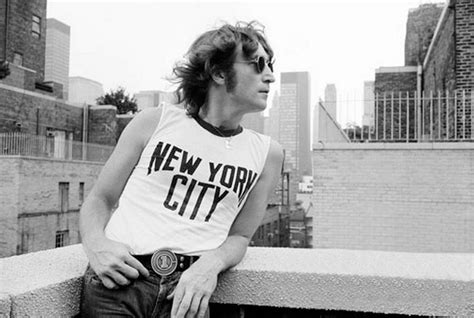