How about that. Impunity City is 6 years old. This is a belated announcement because I started this labor of love to inform and berate on this platform actually on November 8 2016.

But it’s entirely my fault, I’ve neglecting my digital publication seed like a bastard stepchild, focusing most of my published reports on Elon Musk’s Twitter on my account of the same name.  And time really fucking flies when your posting witty barbs and reposting critical news items that you lose track and lose inspiration of what to write in long form. Time also whizzes by faster  when you reach the autumn years like yours truly and are suddenly get tired earlier in the day after consuming so much news and information either from real time or going back to the archives. Inspiration for this has got so dire I haven’t even finished writing the milestone 100th chapter of the New Bad Days because crime has gone up so furiously fast.

And this blog of mine is really where it needs more attention, because New York City has never seen impunity the way it is now with Mayor Eric Adams who has assembled a fraternity crony administration more incestuous than a hillbilly orgy and a uniparty democrat New York City Council that whores itself shamelessly to cult think tanks on a daily basis. This kakistocracy run by an oligarchy that really runs this town actually puts Bill de Blasio’s last mayoralty to shame which I never thought would be possible. New York is also stuck with a stupid corrupt governor in Kathy Hochul who did as much illegal shit in one year as her horndog predecessor Mario’s Son did in 10.

I really don’t want to ramble on here because there is so much shit to get to, but it looks like it’s time to use twitter less despite the vast improvements and new freedom of expression standard Mr. Musk has brought in like a ton of bricks. A lot of evil is going down in NYC; crime, inflation, inequity, lying crooked politicians, dirty agents of the city and nefarious power brokers. It’s about that time to capture these devils and it’s going to need a lot more than 240 characters to do this.

Time for New York to get an enema and an exorcism.

While Southside Queens in the 1141 zip code areas is notorious for it’s McMansions and other ostentatiously tack developments, I never would have thought that one of these things would be coming to South Richmond Hill, an aesthetically ugly and density based apartment building that’s out of scale with the rest of the area. What was normal to see built in officially gentrified enclaves in Brooklyn under the guise (and the cudgel) of affordable housing has now reached all the way on the east side of town. (Not counting the luxury public housing building in Ozone Park and the three mammoth towers at nearby Sutphin Blvd in Jamaica).

Ooh, she’s a beauty ain’t she? And those little bitty windows are as adorable as those pigeon space balconies.

Topping at 4 stories but not designated as affordable, it even towers over the two/three story mixed use apartment buildings along the mostly commercial 101st Ave and one/two family houses on the backstreets. This building is a testimony and a blunt statement that this is the only housing that’s going to be built in perpetuity in New York City, no matter where you are thanks to the City Of Yes doctrine implemented by Mayor Adams this past summer. Even though it broke ground during the last few years of the abominable de Blasio administration.

But this big baby has definitely run into problems in the last few years, because this was supposed to be done and ready to rent in 2020 in the summertime.

Oops. Looks like the new neighbors won’t be here for a while, but at least residents will be spared of parking space feuds that would have ensued once vacancies were filled here.

Sure it’s obviously that the pandemic is partly to blame for the delay of it’s grand opening, but a recent probe into their Department of Buildings records shows quite and expansive shit list of violations and numerous stop work orders in the past couple years. 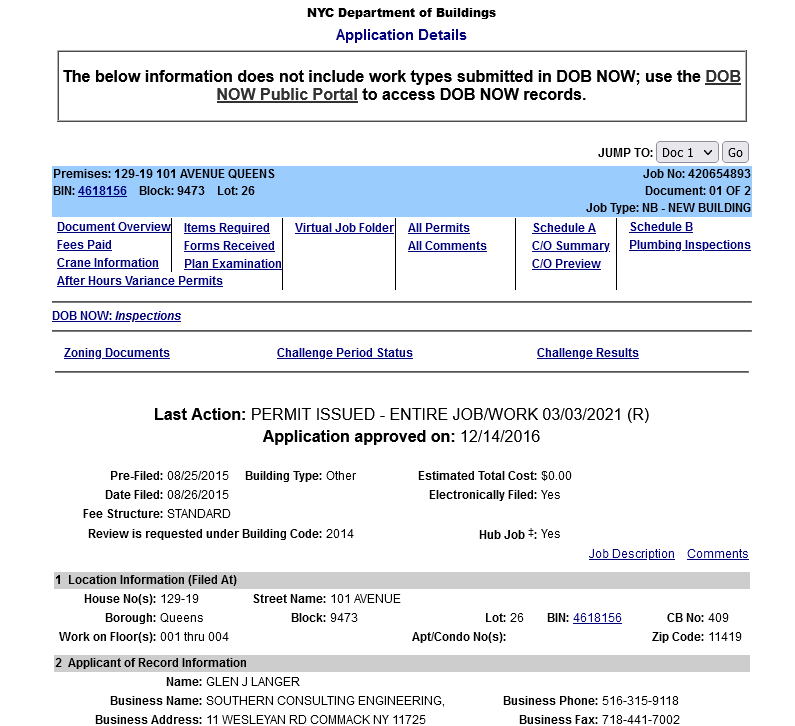 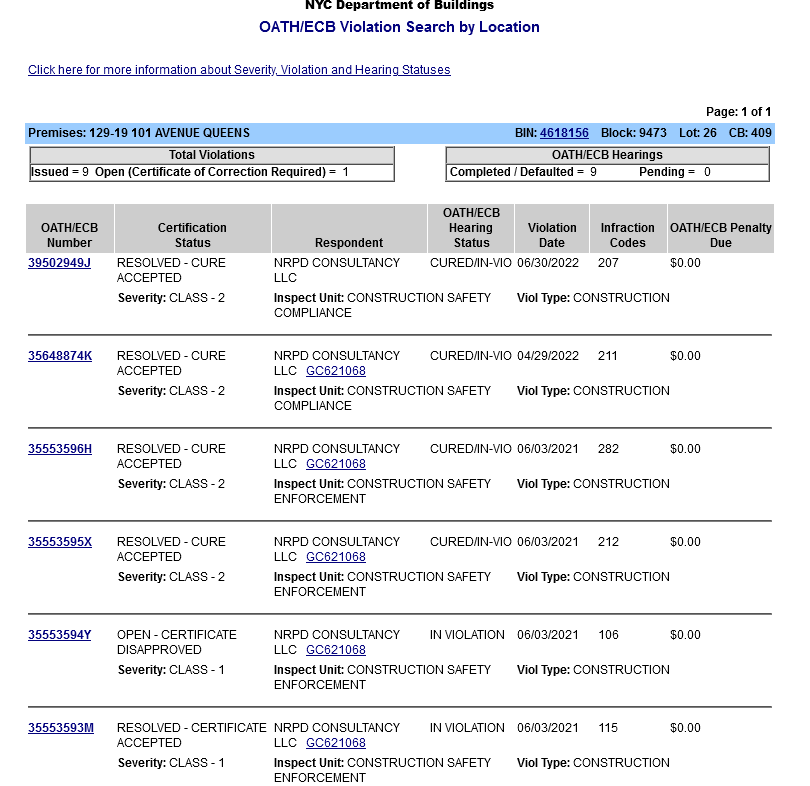 What’s funny about this is that on the day I took that photo when that NYC ordinance was plastered on the wall, an apparition appeared on the second floor window, but it turned out to be a contractor. Even though the D.O.B. didn’t approve any work inside the building until the end of September. 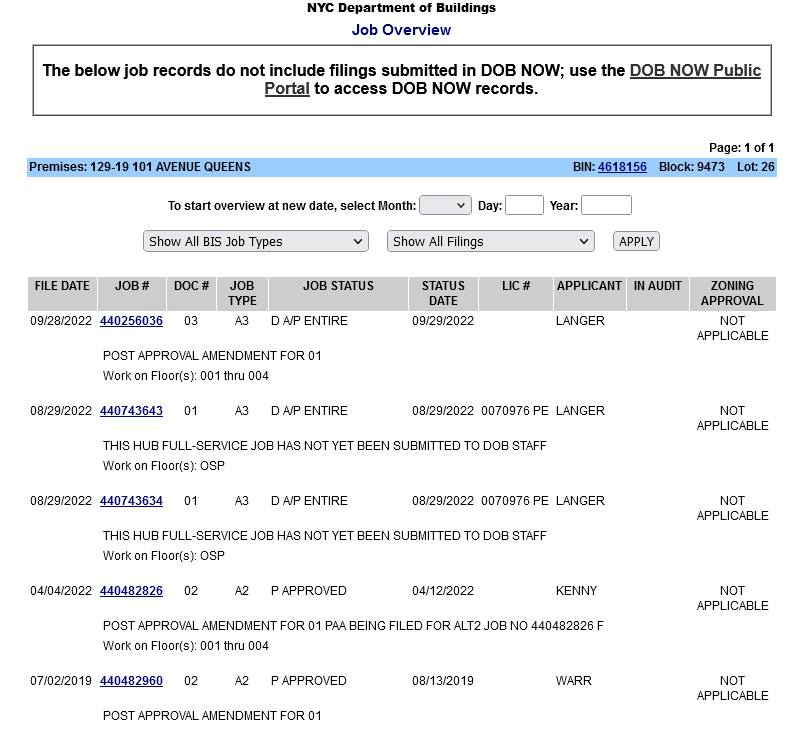 Another odd thing about all the delay finishing this building is that around this time the Department Of Buildings Commissioner Eric Ulrich was under investigation for gambling in mafia run underground casinos while on the job as a City Council member in 2021 .  Although a bigger factor why this building remained dormant was the fact that the owners fired the safety inspector got for blowing the whistle on the owners here for dangerous conditions and putting their workers at risk of injury or death. It should be duly noted that before Eric Adams anointed Ulrich with the DOB chair, he was the representative of this district where this development lies. (Pun fully intended).

Now another funny thing happened since the buildings LLC got reapproval to finish their building, it’s not going to be a market rate density residential building anymore. The owners switched it to a commercial building and have one more summer to get it finished.

Literally overnight, what the city upzoned this one corner in South Richmond Hill for this #YIMBY density housing apartment building that was supposed to be done in 2020 will now be a commercial building ready for opening next summer. And the finished product is going to be very interesting to see since Mayor Adams has decided to let the currently leaderless Department of Buildings take over most of the structural inspections that were always under the purview of the FDNY. Can’t make a city of yes with some buttinski naysayes hanging around.

Obviously this is going to be a hotel, despite it’s very unusual and inappropriate location, although the building’s size is already inappropriate for it. But more likely it’s going to be repurposed and re-imagined into a homeless hotel shelter, especially after thousands of migrants got bussed here this summer from southern states and maybe for the thousands of citizens displaced by gentrification or afflicted with mental illness.  For it’s the only affordable housing and sanctuary this metropolis parody City Of Yes can produce for it’s most vulnerable residents in the richest and most inequitable place in the world.