“You’re on, dummy” Dotard J. Trump mentally prepares his twitter insult to a dictator and his threat to destroy a country.

What a last couple of weeks for Figurehead Donald Trump. For it might be the most significant time he has spent in his elected position and just may be, with his attempts at conveying leadership and shaping society and the world condition via his jackass social media vomiting, the final defining moment of his current stature.

My president is irrelevant.

The first sign was at the United Nations. There was considerable dread about his first address to the assembly and he did not surprise anyone or presumably himself. In a speech written by his young bald asshole ward Stephen Miller, who for some reason still has a job in this administration of chaos, he declared war on North Korea. Simple as that. He declared war and guaranteed destruction on a nuclear armed nation with a population of millions. He declared war and has put 25 million lives at risk, just hours after Congress approved 80 more billion dollars to fund the Pentagon this year and 700 billion dollars total towards the decade, which already hogs most of the nation’s budget. On a platform that usually requires tact and measured words, he called Kim Jong Un “rocket man”, which may be the first time in history where a leader used a juvenile insult on a rival sovereign leader and is the second time that Elton John’s classic song has been devalued. (We all know who destroyed it first)

Figurehead Trump, and whoever is advising him (no one), must have thought that threatening North Korea was going to rattle the nerves of the pudgy wunderkind leader Un, but all it did was make U.S. ambassador Nikki Haley anxious. For the whole 40 minutes during the speech, she had a look on her face that was nervously anticipating the dreadfully fateful moment of the declaration of war as she was easily distracted and seemingly more interested in the amount of people walking away during the speech. The exasperated migraine expression on chief of staff John Kelly couldn’t be more apropos of the population that is sick of seeing Figurehead Trump making our country a laughing stock.

Chief Of Staff John Kelly goes “DOH!” as does the general public.

Besides the aforementioned insult and the world endangering threat, the speech was mostly know-it-all condescension to the other nations for not contributing much, which although not being sympathetic at all to them, it’s not entirely their fault when the ol’ U.S.A. M.I.C. is the largest military in the world and it’s combined human and firepower  matches the amount of over 20 to 30 nations, and it’s actual budget is bigger than the other 7 superpowers combined, which includes Russia and China. And he also found time in the end to threaten Iran, which responded with missile testing of their own. Figurehead Trump looked and sounded slovenly and left the majority of the crowd bored and unimpressed, even after the threat to attack North Korea, it resembled the cartoon character Peter Griffin when he demanded respect from the UN for his accidental sovereign nation backyard.

The result of this shit talking by the overachieving mook from Queens just riled up his rival despot even more, to the point where Kim even engaged in the verbal snapping by referring to our president as a dotard. A dis that not only is surprisingly apt but actually syncs well with Trump’s birth name, making it easy for his domestic critics from DC to the billions of trolls worldwide on social media. Dotard Trump. Wow, it just glides off the tongue like eating a Carvel sundae. And just as fattening. And it surely will unite the NK masses to rally behind  Kim, because there is nothing that will bring out national pride like threatening to totally destroy a country of it’s citizenry and their leaders, no matter how oppressed or starving they are.

Figurehead Trump, being a former failed casino magnate with the instincts of the shittiest chronically addicted gamblers, decided to let his divisive banter ride as he addressed a crowd in Alabama in his still in-effect MAGA campaign tour by peppering his speech with a warning to NFL players to stand for the national anthem, in a reference to unemployed and blackballed player Colin Kapernick’s silent protest last year. Trump decided to pander to the barely audible crowd/his base by grossly generalizing any player that shows solidarity to the banned QB as a son-of-a-bitch, punctuating it with his old shitty show catchphrase “you’re fired”.

The league responded in kind and in droves, which included all of Trump’s billionaire team owner donors. 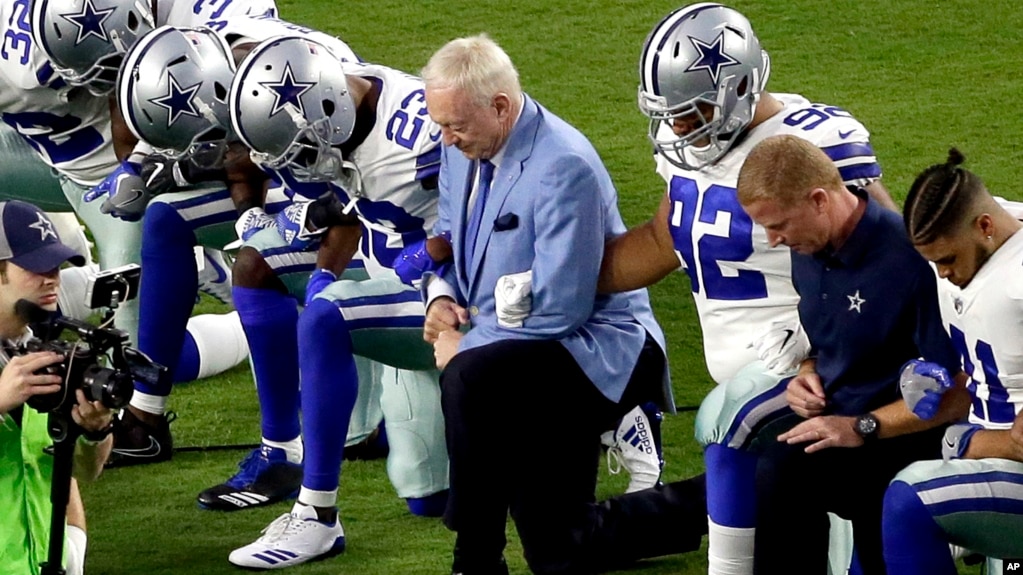 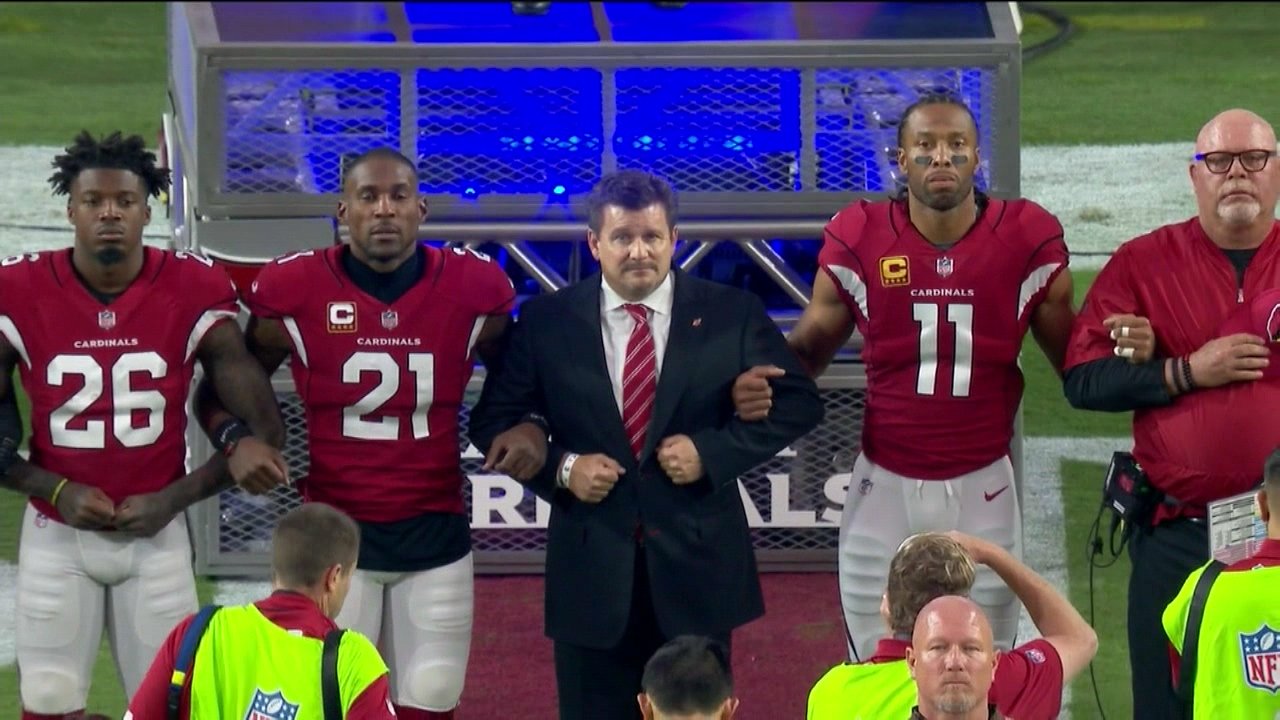 The solidarity against Trump’s fascist demand for jingoistic and blind loyalty spread to other sports, notably from a rookie catcher from the Oakland A’s with his teammate supporting him. And straight from the NBA, the game’s most elite and popular player Lebron James responded to Trump’s provocation and his petulant disinvite of the Golden State Warriors visit to the White House by referring to him as the classic of all insults as a “bum”.

During this humiliating nationwide dressing down of the virtual commander-in-chief, Hurricane Maria, the third major killer storm in barely a month, laid waste to the U.S. Commonwealth State and nation of Puerto Rico, which had it’s electrical grid wiped out with the passing of Irma just a few weeks before. Maria, with it’s 150 mph winds and incessant biblical downpours, left the streets and highways flooded and destroyed forestation. And it devastated the electrical grid that will leave most of the country without power for months.

The U.S. Commonwealth State of Puerto Rico did not get a response from Trump for days for he was so entwined in persuading professional football players to stand up for the anthem and persuading the owners to fire them for insubordination if they don’t. Which resulted in the citizenry starving and dying of thirst for lack of potable water and food, making it impossible to get such sustenance. And no way to get these items for the flooded roads made access to them extremely difficult and no electricity for them to cook or prepare items. Hospitals were also suffering from the lack of power, leaving thousands of patients lives in peril. Initial that came via the Red Cross was insufficient. And Trump did not send the military over in 5 days, and when he did they were understaffed. He also refused to lift the heinous Jones Act against shipping from foreign countries, despite suspending it to aid the city of Houston, Texas and South Florida to assure and hasten the repairs and aid to their citizens and infrastructure. And hundreds of shipping containers containing food, water and medical supplies were left immobile with it’s contents left to rot.

When he wasn’t bragging about the alleged fantastical response of aiding the nation, which the aforementioned facts clearly belie, Figurehead Trump was making a pathetic excuse for why it was quite difficult to get to U.S. Commonwealth Nation despite having the biggest Navy in the world. That it was the unfortunate fact that Puerto Rico is surrounded by big ocean water.

This pop culture reference might be stretching it, but Trump said this with the same speech pattern as the cartoon death metal band Dethklok in the first scene of their debut film “Blood Ocean”.

Anyway, the Mayor of San Juan, Carmen Yulin Cruz, clad in fisherman’s overalls surveying the damage of her city waist deep in the polluted water, looking disheveled and like she hadn’t even showered, went on television to beg for aid that was not getting to her city and the nation as a whole and to refute the tone-deaf ignorant claims of Figurehead Trump and his Homeland Security patsy of the condition of the ravaged nation state. How a leader reacts.

So Trump reacted as is his nature of a man who had everything handed to him with a silver spoon and platter, and a deep seated contempt for minorities and did find time during his 50th weekend stay to the golf course he owns in Jersey to disparage her for not showing gratitude, accusing her of partisan political griping that he assumed influence her justified criticism, her not being able to lead and the nation for basically being lazy and not contributing enough. Which led to more universal condemnation of the spiteful Divider-In-Chief.

He finally showed up to Puerto Rico after 2 weeks to again, without the trophy he dedicated to them at the end of the Presidents Cup tournament and not even new caps to wear for the occasion, to once again praise his lousy response and the understaffed military personnel that got there too late and again insulted the people and the elected officials gathered at the conference by reminding them that their existence is costing the U.S.A. a lot of money (He probably deduced this from his avaricious economic advisors, neoliberal Gary Cohn and budget manager Mike Mulvaney, who are probably shitting themselves that they won’t be able to enact their American billionaire tax cut budget coming soon). Maybe he should give back the loads of money him and his son Eric got in the U.S. Commonwealth with his bankruptcy claim from his failed attempt to revive a country club with his brand/birth name on it. He also told a conference of elected officials that their fatality list wasn’t as bad as the death count in New Orleans (mostly the lower class 9th Ward town) after Hurricane Katrina, which simultaneously undermined and insulted them and their citizens and dementedly justified his willfully ignorant claims of his slow ass response and it’s good news story theory.

When he finally met Mayor Cruz, whose presence on the flooded streets is comparable to Rudy Giuliani’s on site action on 9/11/01 and should be Time’s person of the year, she kindly told Trump that it was about lives not politics and the Bum hastily backed up and ignored her. He spent the rest of his brief time chucking paper towels in a room in a peculiar video with maybe the only group of citizens happy and impressed to see him. No word on the brand of these towels or their ability to absorb.

After this deplorable hat trick of threatening to destroy a nation and it’s people; trying to control the beliefs and deny the freedom speech of athletes and you, the people; and his blatant indifference to a nation of people in desperate need, he did not intimidate Kim Jong Un and North Korea and possibly gave them an advantage in a new cold war, and turned Colin Kapernick into a civil rights icon, and Mayor Cruz into a worldwide sympathetic figure and hero, which she certainly is.

And even his Secretary Of State, Rex Tillerson, cannot even contain his rage and emotions by referring to Figurehead Trump as a Fucking Moron who speaks for himself and not for the country, the government and you, the people.

He has no credibility, or dignity, sense of decency or reason. All he has is his fucking twitter to get him by and his undeserved title that you, the people gave him by believing him and voting for him. Whose support for him is now thankfully waning. He will not be redeemed and it looks like he wouldn’t want to be. All he wants is to further enrich himself as now he gets to work on the heinous national budget for billionaire tax cuts for greedy dotard bums like him. That’s all what he’s and what this presidency is about.

As for everything else, his influence and impact and all the words that come out of his halitosis mouth and from his little stubby doodle fingers is jack shit. The President is fucking irrelevant.