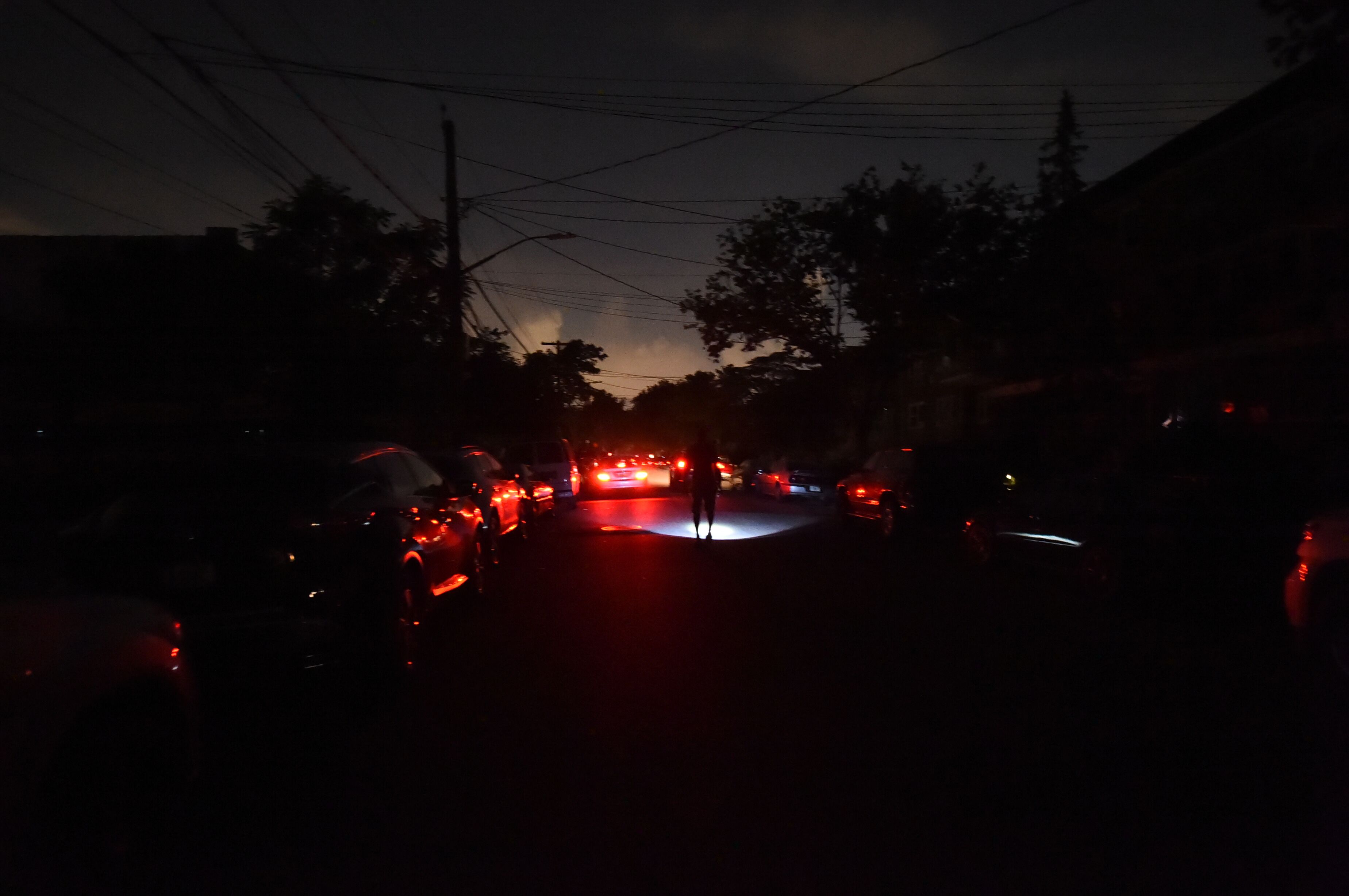 Back in July on a Saturday night on the hottest week of this summer, the lights went out on Broadway as well as the entire 30 block radius spanning Midtown West to the Upper West Side for five hours on the anniversary of the 1977 blackout that plunged the city into a free-for-all crime wave. During this one though and fortunately for citizens and transients in that area at the time, particularly from Times Square to Columbus Circle, the power got wiped out when it was still daylight and the streets were still congested enough with vehicles and pedestrians that nothing really crazy or any purge-like mischief occurred on the streets. People were still milling about, some got involved in directing traffic until the NYPD got deployed and even actors and musicians from theaters and Carnegie Hall gathered on the sidewalks to entertain passerby as their shows were shut down.

Council speaker Corey Johnson made like Giuliani on 9/11 and immediately took charge since Mayor de Blasio was making an ass out of himself trying to pitch progressive policies he stole from Bernie Sanders to a handful of people in Iowa. All in all, it was practically a good time had by all who happened to be there. Although it was surely not appreciated by people relaxing or having company in their apartments or trapped in elevators; or commuters stuck on the trains or standing in a virtual schvitz in the subway stations; or tenants in public housing buildings going through another spontaneous shutdown; or patients and doctors in hospitals and even people seriously paying to watch Jennifer Lopez sing and dance at the Garden (maybe the only redeeming thing about the blackout)

But the aftermath was not so swell, as time came to demand accountability from Con Edison, and out came the righteous indignation bloviating from the likes of our Governor and Mayor. Andrew Cuomo got to do his alpha dog thing and condemned the corporate utility, peppering with threats against them by claiming to use another energy company, and Mayor Big Slow came up with blase’ hypothesis of his own after Con Ed’s ambiguous p.r. response for the causes of the blackout. (hey de Blase’, new insult)

Actually, responses. Crazy Con Eddie’s public relations team seem to be taken aback of the isolated region power failure, as they went back and forth trying to explain what triggered the blackout. Their initial assessment derived from a manhole explosion in the Upper West Side then announced that it was a technical glitch at a substation in Hell’s Kitchen while adamantly refusing to consider a grid power overload. It turned out that it was a faulty transfer that caused the explosion of a 13,000 volt cable underground on the Upper West Side. Which they waited 3 days to confirm after they got it right the first time. Three Days. Granted the mayor and governor were right to question the city’s sole energy providers strange ambiguity in divulging this information, as they themselves also rely on this deceptive tactic to mollify their constituents being the hypocrites they are.

A few days after Con Ed’s revelation, their flacks must have got self-conscious and thought that transparency was the way to go in order to ensure credibility with their customers of the five boroughs. So on the day when they finally told the truth about the Broadway blackout and with the weather forecasts predicting temps pushing 100 on the weekend, Con Edward glibly announced/warned that more blackouts would occur. While honesty like this is welcome, it’s dismaying when it’s coming from a billion dollar energy corporation responsible for power maintenance for 24 hours that should always be taken for granted.

Well the weekend came around and on this way hotter and sultry 100 degree Saturday night, Con Ed’s self-fulling prophecy manifested as the sole energy company decided to shut down power grids in Southeast Brooklyn and parts of Southeast Queens overnight and Sunday morning in a preemptive strike to avoid a citywide blackout

The reactions over 30,000 citizens from those selected areas victimized were admirably cynical and appalled. Especially from a woman in Canarsie who justifiably implied and accused the Con of regional discrimination with their disingenuous claims of preserving electricity.

“You’re making us suffer to preserve who?, Who are you preserving? Why are we not important?”

The answer to that can be clarified with pictures. Because they are worth more than a thousand words from Con Ed’s p.r. toady and from the obtuse statements from de Blasio and Cuomo, along with the latter’s abysmal demands.

These are what and who Con Ed and as much as they feign ignorance Your City are intentionally preserving energy for. These are just the obvious ones. On top is Times Square, which is not the Times Square of old, where the most creative living ad was a steaming cup of coffee. Apparently, the Department Of Buildings must have thought that putting 2, 5 and 20 story and about a block wide L.E.D. television screens and having them run every second was just a grand fucking idea. Somehow, while Con Ed was spinning the cause of the blackout for news consumption and with all these literally humongous obvious signs, they did not mention one time that it was a power overload that caused the cable to explode. Not fucking once. Who are they kidding, oh yeah, everyone.

Really tho, these bigger energy devouring monsters than Godzilla, Mothra, Rodan and the Stay Puft Marshmallow Man combined. Then you have to factor in the buildings these screens cloak and all the new luxury tower and hotel development in just under 5 years with Hudson Yards and further up the Hudson River side, plus Long Island City, Williamsburgh and Greenpoint, Park Slope and Downtown Brooklyn and imagine all the energy consumed with the A.C.’s on full blast as citizens in Canarsie and Jamaica sweltered in the darkness.

All the strips of those tony areas must be taken into account to, which are filled with high end bars, clubs and restaurants with rooftop access. Surely businesses in the southern part of Brooklyn had to be sacrificed to maintain those aforementioned town’s vibrancy because Con Ed’s intentional energy inequity and austerity shutdown.

A City Council hearing a few weeks ago addressed this concern. Council Speaker Corey Johnson found enough time to stop dancing and leaping in public like an idiot and grilled Con Ed’s representatives by abbreviating some cuss words with his accusations towards them as he other council members feigned righteous indignation as the electric company continued to bounce these questions off. Since none of those questions brought the scenario of an overload for the excessive use of electricity. Since they mostly focused on trying to maintain the infrastructure of the grid instead of the causation of the blackout. Focusing on the feature instead of the bug, which is that the grid cannot handle the energy consumed from these recently built towers and the overwhelming demand of a bigger and denser population residing in them. Which shouldn’t be a surprise because that scenario was never considered when a transformer exploded in Astoria that made the evening sky turn florescent blue last December that resembled the manifestation of Gozer or the return of the Highlander. But Corey was more concerned with the way Con Ed’s reps optics looked in how they were coming off. Yeah, he’s going to be some mayor.

Surely this will continue to happen while our officials dither and don’t probe deep enough in their inquiries and Con Ed will continue to be the city’s lone energy provider and surely fuck up when the next heatwave or extreme weather condition comes. Because with all the technology and actual demand for renewable energy sources and as the city got taller, denser and overpopulated, Con Ed never thought to build a backup power system deriving from solar or wind. Wonder how they are going to handle Google’s expansion and Disney’s new studios on Soho’s west side?

Maybe this is why Con Ed are being glib. Their VP for “government relations” in charge for dispensing this palatable information used to work for the city’s worthless, unnecessary and agency that has long outlived its usefulness except for the wealthy; the Economic Development Coporation.*

Expect more spontaneous and discriminatory power shutdowns and insipid spins and weak ass apologies from the city’s energy provider, citizens. As others will leave and move to Florida for cheaper rents, lower taxes and what they presume will be a better maintained energy grid (although they will be taking a risk with global sea level rise).

The city got lucky there was no looting, rioting and fucking in the streets during the first blackout and the preemptive second one. Next time, especially if Ed pulls off the latter, people are not going to wait to question why or whom. They are going to demand answers with torches and yellow vests.