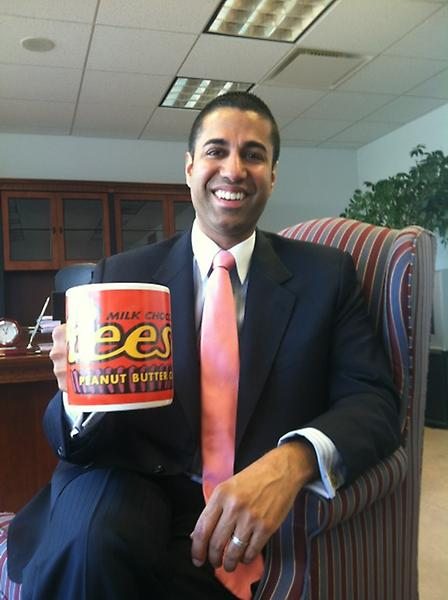 The FCC commissioner and his douche goblet.

The days of universal fair usage of the internet are winding down as the planned pricing restructuring of the third biggest utility behind electricity and water will be officially put into place. Unless saner heads prevails and Figurehead Trump wakes the fuck up and actually looks at the discriminatory and economically systematic fascist plan to gouge customers and curtail usage.

Ajit Pai is the worst and the penultimate kind of corporate bootlicking sell-out shills (it should be noted that Figurehead Obama hired this dork). The kind of dick that will charm then hang with you, then malign you when he’s with the boss, causing you to lose your place or employment, no matter what the facts are. He is also another selfish individual with absolutely no shame or moral sense, character traits that have become common with most of the youth of this distracted with bullshit, status and money obsessed generation and of course the boss of America, Figurehead Trump. For his last job was as a lawyer for Verizon, which despite being worth billions and having the most powerful bandwith of all telecoms, is purely not content with their success and wants more and having their dutiful patsy leading the brigade has the executives and shareholders nipples and reproductive extremities erect and excreting sticky fluids.

Pai and the FCC had to get credibility to back this seizing of the internet by putting a poll on their the organization’s website. As expected it got a massive turnout with a majority of the poll actually against net neutrality. Too bad and as predictably expected it was tainted with multiple postings by former world wrestling champ John Cena, Jesus Christ and even the last president Barack Obama, who happened to sign the net neutrality rules into law in the first place. And in the old school way of rigging votes, it had comments from the grave.

All of the comments had the same talking points pablum that has been repeatedly hammered to sway the public (unconvincingly) and the easily led and bought government officials.

Which is typical in the pandemic culture of cheating that has enveloped the way business of any kind, especially with this case involving the predominant telecoms (and also, obviously, real estate) is conducted.

The bottom line is to make as much money at as much expense on the finances of consumers that rely on this utility but mostly on the rights to be informed. Because the abolishment of net neutrality will make the acquiring of information a luxury product, or even worse will lead to total censorship for networks or individuals to disseminate information if it’s not in line with the ISP’s protocols or standards. Or if they don’t pay enough on their bills. This is cut and dry economic fascism.

The end of net neutrality will be another nail in the coffin containing democracy’s corpse if this selfish greedhead Pai and his two fellow shill monkeys on the FCC panel get their and their telecom overlords way. And they have clearly shown that they don’t give a rat’s ass what anyone thinks, which is 70% of the public that’s aware of this digital sabotaging which includes a nationwide solidarity group of the left and right from standouts like the Young Turks and Breitbart Media.

The deadline is this Thursday, which is just less than a week to persuade them to care. So here’s the commish’s email and phone number along with the two other guys who plan to vote with him.

Although the signs look dreadful, it’s worth the effort to break their brains trying.