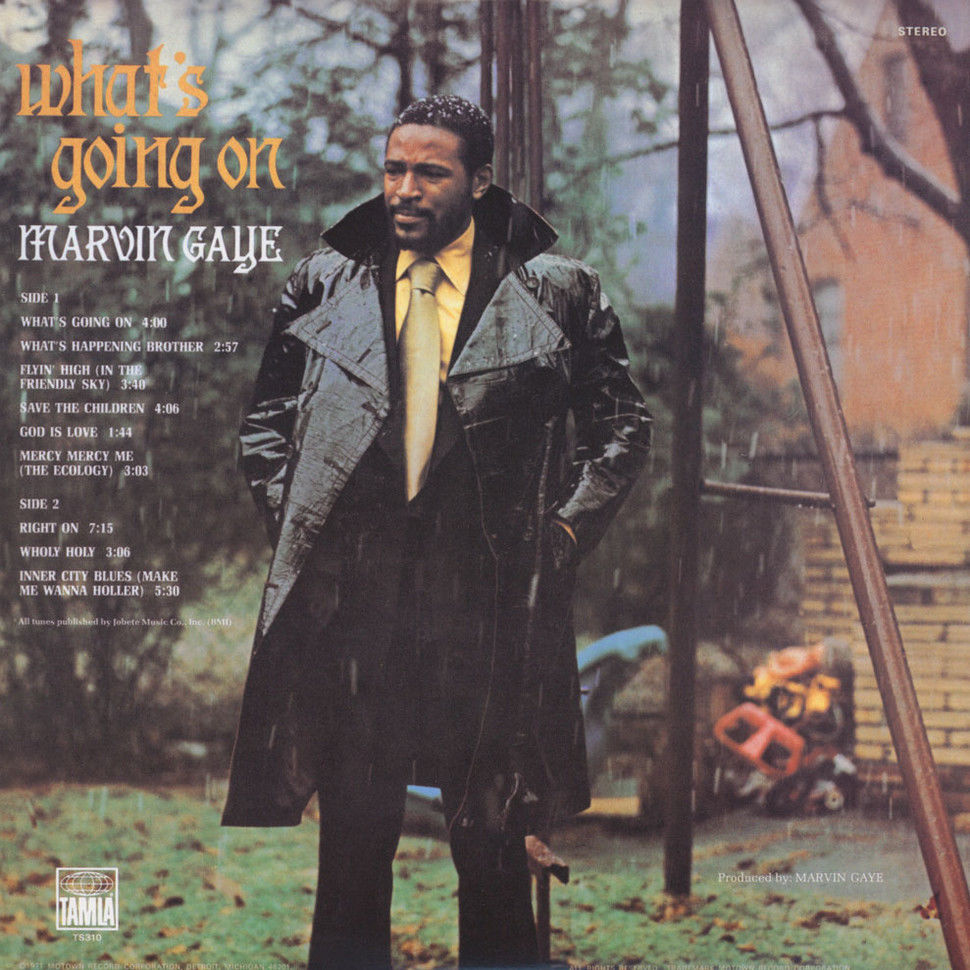 Love rain over me

What’s Going On. Marvin Gaye’s voluptuous geopolitical musical song cycle opus was unleashed on the world 50 years ago this day. Even the title is genius, by taking a casual common greeting and repurposing it as a news program and political soapbox.

The single “What’s Going On” dealt with the Vietnam War, the conflict abroad and the conflict at home, meaning the nation and the home of the soldier coming home battling in the worthless and expensive decade plus U.S. mission to stop communism in that small sovereign nation. In the time since, this nation has been embroiled in the infinite war on terror invaded Iraq twice and then occupied it the second go round for 8 years, leading to deaths of over millions of residents and over 5,000 U.S. soldiers and also invaded and occupied Afghanistan for 20 years. The U.S. also is involved with multiple conflicts with other sovereign nations and just bombed a city in Syria only a few months ago. It makes you wonder what gping  on in the mind of a soldier coming home from those wars, conflicts and occupations.

“Flying High (in the friendly sky)”, a heavenly track that deals with heroin addiction, a drug crisis that would persistently infect the masses and it’s still a massive issue to this day.  In the last few decades, heroin as been joined and even exceeded by the scourge of painkillers, which used chain pharmacies as mills and professional doctors as pushers to spread the product, leading to thousands of deaths and millions to destitution. Currently, a lot of heroin on the market is being diluted with the toxic additive fentanyl, making it more affordable and addictive akin to the crack rock epidemic of the 80’s and early 90’s.

“Save The Children” addresses the plight of the neglect of children suffering under unyielding conditions of negligence and poverty from poor neighborhoods to war torn lands and condemns the indifference by those in power in an swirling angelic and jazzy musical arrangement. In the time since, child neglect in these environments still persist as poor kids in poor towns continues to get undermined and are last on the minds of pandering politicians obeisant to their wealthy real estate donors and also with the continued funding aid and weapons deals to powerful foreign allies, using them to oppress and disenfranchise and ultimately kill kids all to conquer territory and capture resources.

After God Is Love, a driving gospel song propelled by Motown’s legendary session band The Funk Brothers comes the compelling and most prophetic song on the album “Mercy Mercy Me (The Ecology) about the environmental state of the planet Earth which Marvin already saw was being damaged by the hands of Man through manufacturing and commuting pollution. This song came out a year before there was a movement and zeitgeist thing called Earth Day (although he beat the rock band Yes to the punch on this topic, who did a whole album about it on their classic Fragile release a few months later). We all know where we are right now in 2021, as the extreme weather effects from Climate Change and environmental duress from Global Warming led to city destroying hurricanes the likes of Katrina and Sandy and the carbon big feet of plane commuting, computer and cellphone manufacturing and military conflicts around the world continue to stripmine the ozone layer, rapidly making the planet hotter and elevating sea levels.

Following the Latin-beat manifesto “Right On”, a communal party jam by Marvin and the Funk Brothers and another gospel song “Wholy Holy”, the album brings it back to the streets with the despairing existential depression of “Inner City Blues (Makes Me Wanna Holler) as Marvin composes a poetic correspondent report about profligate government spending on planet exploring and war efforts while ignoring blighted cities and depriving them of essential basic services; leading the blowback on society and realities on the ground, from being rent burdened from higher cost of living, a rise in lawlessness and anarchy leading to gang warfare and overt aggression and abuse of authority by police. In 50 years, none of these conditions have fundamentally changed as gangs continue to multiply and trigger happy rogue cops continued to be enabled as extrajudicial shootings increased as well as extrajudicial force, which finally hit the nadir tipping point with the real time murder of George Floyd by Derek Chauvin. Federal spending that left safety net programs like affordable housing and medicare for all went wanting as police forces continued  to get gifted by the feds with military gear, guns, vehicles and tech surveillance and also self-defense training by Israel’s military. And now we got a fucking Space Force.

The coda of Inner City Blues has Marvin reprising a verse from What’s going on which focuses how the views of the younger generation are getting undermined. If only Marvin had lived to see Twitter, although he might be dismayed to see the same youth endorsing repression of dissent. And if Marvin thought the government was fucking bad and counterproductive, who knows what he would think of how the wealthiest have got wealthier in the last 50 years and even in the last year and this year during this pandemic and in this skewed economy where a new gilded age and a new depression are happening in sync with each other.

Too bad Marvin has been dead for 37 years and isn’t around to write a beautifully arranged and performed album about what’s still going on and even worse is that nobody has the will to compose an album about these issues or even has the chops to make an album or a three and a half minute song this musically rich and full of catchy hooks for repeated listens (with the exception of Childish Gambino’s “This is America”) Good thing “What’s Going On” is still able to garner new listeners.

Much as been written about this album already but it should be worth another mention about how infinitely timeless and relevant this album is. It’s not just a classic recording, it’s a living document.