The mayor of climate emergency

Current mayor of New York City Bill de Blasio might be suffering under a massive hangover after the abrupt ending of the final and biggest concert of his NYC Homecoming Week, which he and the New York City Economic Development Corporation planned nearly 3 months in advance, as remnants of Hurricane Henri hovered over Central Park and delivered some lightning bolts to force the concert promoters to kill the show after only 2 hours and in the middle of sappy songwriter Barry Manilow’s set.

Nothing couldn’t have been more apt of The Blaz’s incompetence and megalomania than when he went onstage and tried to salvage the festival by yelling at the crowd not to depart and promised the show would resume while shielded by a saran wrap slicker, only to have it kiboshed 8 minutes later. But it’s not like this wasn’t just spur of the moment desperation from the Mayor, because this idiot actually had held a press briefing with the NYC Emergency Mgmt. Commissioner to warn about Hurricane Henri’s arrival. At the exact time when the concert began at 5 P.M.

So The Blaz and the Emergency Dept. Commissioner John Scriviani knew the severity of the tropical storm, warned citizens to take precautions and to avoid any plans that would jeopardize their safety and they still allowed the show to go on. These two boobs knew the storm would be unpredictable and both acted like that Henri was just going to remain in Long Island until the next day. Ludicrously unscientific claims the Blaz made earlier in tweets 4 hours before he declared a state of emergency right when the We Love NYC concert first act was performing on stage (and about 6 hours after the current governor Andrew Cuomo declared a state of emergency!).

As of now we do not expect the weather to have any major impact on tonight’s concert in Central Park and the show will go on!

If there are any changes in the forecast we will update New Yorkers immediately.

The Blaz being oblivious to the irony and of responsibility from his forecast and advice from his emergency agency, around 7:30 PM as the sun was setting Henri made his presence felt as the first bolts of lightening appeared. The music promoters sensing doom and actually cognizant of the National Weather Service warnings that were pinging their phones for two days like Commish Scrivani mentioned, cut Barry Manilow off and killed the lights, flashing a big sign for the vaccinated masses to evacuate. The Blaz, after big footing the stage of the last 4 homecoming concerts and standing by his #NoStoppingNewYorkCity hashtag credo came out and thought he could save the show and what manifested was as asinine as it was surreal.

Here, almost in full. “We want to bring the concert back,” de Blasio says. “Move to somewhere indoors briefly nearby. We’re going to get you an update shortly.” pic.twitter.com/lXuyVP5GgI

The last time an elected official prioritized entertainment and leisure over the safety of the citizenry was the Mayor from the movie Jaws.

But since this real life and The Blaz valiantly and vainly tried to mess with the primal force of Mother Nature. Taking a cue from his self-made credo hashtag #NoStoppingNewYorkCity, the Blaz attempted to gaslight the vaccinated audience to hang out until the rain and lightning stopped and the show could resume for their safety (?!!!!) by suggesting to find shelter in a public park so they wouldn’t be easy targets, even though the only things passing for shelter are the trees, which are also lightning rods. Maybe the Blaz thought this was proper advice because he knew he had shelter waiting for him via the VIP guest tent or with his NYPD motorcade entourage.

It’s not just that de Blasio is a clueless jackass who thought that thousands of people in Central Park could quickly find indoor shelter. It’s that HE knew his security detail caravan of SUVs were parked within walking distance of the stage, where HE would be safe

The fact that he said this while wearing a ridiculous slicker in front of a jumbo screen warning ablazed in hot pink telling the audience to get out of harms way  established that this hysterical and hazardous moment where the Blaz out-did a mayor from a fictional movie and became the mayor of climate emergency. Never mind that only a few days earlier, lightning crashed at Orchard Beach in the Bronx where a 13-year-old boy got killed.  What’s even worse is the audience actually believed his gaslighting and came back to the lawn and decided to wait it out for a few hours.

This is, to be clear, a ridiculous plan that will never work. This is tens of thousands of people at a ticketed event in the middle of Central Park! As soon as de Blasio says this, people who were leaving turn around and start streaming back towards the stage. pic.twitter.com/HGujhvnCJv

After this fiasco, it’s definitely settled that de Blasio’s stupid is terminal and beyond repair and all it took was a tropical storm to prove it this time. But besides the fact that this show should have been at least postponed for another weekend, it should have been postponed weeks ago as the Delta Variant raised doubled the percentage of total COVID infections ever since the city dropped mask and distancing guidelines on July 1, as well as the other sparsely attended (because of the vaccine mandate and less than 50% of Black and Latino people vaccinated) 4 borough shows featuring all hip hop music and George Clinton being how a lot of middle aged rap legends have been dying and Dr. Funkenstein is vulnerable to the contagion at the age of 80. And it most definitely shouldn’t have been planned in the first place when the Blaz announced this show in June before the city was yet to be fully opened in September. Which is what’s even more maddening about Bill’s fiasco, this fool and the NYC EDC planned this Blazapalooza for 2 months (probably longer) and when it comes to actual crises and services like gun violence and the reopening of schools, the Blaz only prepares at a moment’s notice.

But at least the conclusion to the NYC homecoming week was a fitting finale for the Blaz, a self-serving self-promoting wretch who was only using this festival week clearly to build his national profile and personal mayoral legacy in addition for the wanton avarice of concert “curator” music mogul Clive Davis, the monopoly concert promoter and ticket seller Live Nation; and corporate news monolith CNN who lost millions of ad dollars losing 3 hours of broadcast time thanks to Henri’s foreboding presence.

It’s doubtful the Blaz is going to learn a thing from this debacle*, for his hubris is the reason why his concert got kiboshed but that same hubris is what’s actually been helping him get by his calamitous final year in office. Plus the whole world got to see what a jerkoff he is with his embarrassingly vain attempt to save his grand homecoming concert.

But now he’s run out of bread and circuses and now he has to do his actual job of governing, which he has done with such criminal incompetence through 8 years and with abhorrent juvenile conduct ever since the summer began. And with Cuomo finally gone in a few days, all scrutiny will be entirely focused on de Blasio and his kakistrotatic administration along with his policy decisions and internecine machinations

A giant Ferris wheel is coming to Times Square — and the idea is to roll out a welcome for tourists as the city looks to bounce back from the pandemic.

The massive amusement ride — which will stretch 110 feet high, the equivalent of 11 stories — will start getting assembled as soon as Thursday and be ready to hoist passengers high above the Crossroads of the World beginning early next week, The Post has learned.

The outsize attraction will be located just west of Duffy Square on Broadway between West 47th and West 48th Streets for about a 22 days, according to Vito Bruno, who heads up the Brooklyn-based entertainment company that’s behind the project.

“The city needs something fun, happy and nostalgic that brings you back to your childhood,” Bruno told The Post.

He added that he approached the Times Square Alliance about the idea several months ago, “and it’s been a sprint ever since,” with a myriad of permits, inspections and signoffs from multiple city agencies. 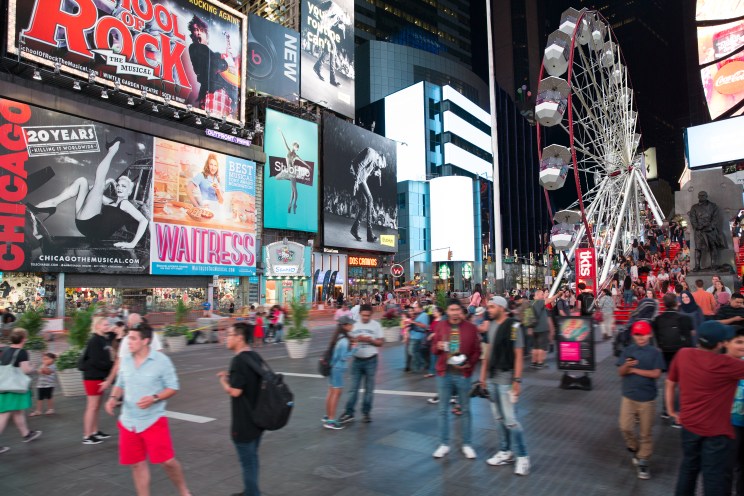