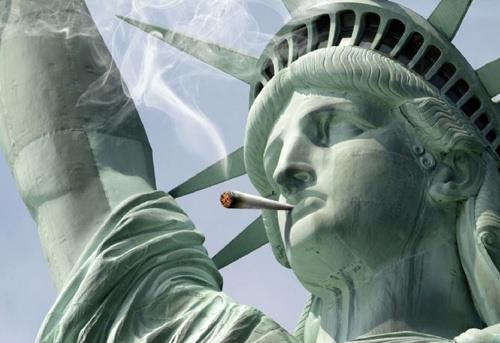 Way to go and infinite thanks to 67% of New Jersey voters to finally end their prohibition of the personal use and commercial distribution of marijuana!! And just like the Giants and Jets, this is as much a provincial claim and shared victory for New York City and State citizens too.

There’s already reactionary bellyaching to this, with certain rigid folks harping about how there isn’t enough local supply to be sold commercially and communities will not approve a store in their towns which is just fearmongering about dealers selling out in the open with impunity. But the referendum shows that there’s no impunity anymore. As for supply, surely the overwhelming demand for the ganja will instantly fulfill that in a matter of months. It’s also doubtful that with 67% of voters raising their voice for common sense distribution, pretty sure a bulk of them are from those communities and even the most conservative folks might not even notice quality strains being sold from the nearby CVS store.

New Jersey isn’t the only one that has embraced the effects of the high, budgetary potential of money that will be flowing in to their state coffers that is. Red States Arizona, North Dakota and Montana voters also passed referendums on recreational pot legalization, illustrating that they have more common sense and are more progressive than Blue State Governor Cuomo, who could have easily legalized pot with a stroke of his pen during the last big ugly budget that he unilaterally controlled via the executive power the Senate and Assembly gave him weeks before when the pandemic started in New York.

Apparently, Cuomo the Narc would rather have the state continue to make money jailing people for pot than getting more money from the taxes from the sales of pot from those same consumers.  But that doesn’t mean shit anymore, now instead of risking arrest for buying or smoking pot on the streets of NYC, buying sweet buds and smoking them are now a short convenient car, or PATH bus and subway train ride away!

Sure you can bring the kind back to the city, possession is legal even though smoking it is not but there are still plenty of spots to spark up with impunity. But thanks to Jersey, the hope is still alive that pot will finally be as legal as booze again, because Cuomo has to run for re-election and once he sees the surplus coming in from state wide pot sales over the Hudson, the megalomaniac governor will have to hold on to his ego and sign an E.O. for weed’s inevitable liberation, especially if he wants to win re-election again.

So thanks again to New Jersey and also Arizona, Montana and South Dakota for blazing the freedom trail to blaze joints and blunts and hitting pipes and bongs and ensuring that personal liberties still matter and will make America truly great and mighty high again.